In an unexpected and unprecedented move, actor/comedian Bill Cosby‘s publicist/crisis manager Andrew Wyatt took to his client’s official Instagram with a short video on Friday (November 27) to ask followers to watch the live stream of an upcoming appeal for the fallen comedian. The legendary performer, whose career spanned decades, has been serving his 3-10 year sentence for apparently sexually assaulting and giving drugs to accuser Andrea Constand at his residence back in 2004. The post of the less-than-2-minute video was captioned:

On this Black Friday, let’s use our dollars to create unity amongst all races, genders and faith based groups. Thank you for your continued support and please watch this powerful video promoting oral arguments for my upcoming appeal with the PA State Supreme Court on 12/1/2020 @ 9:30am/EST. 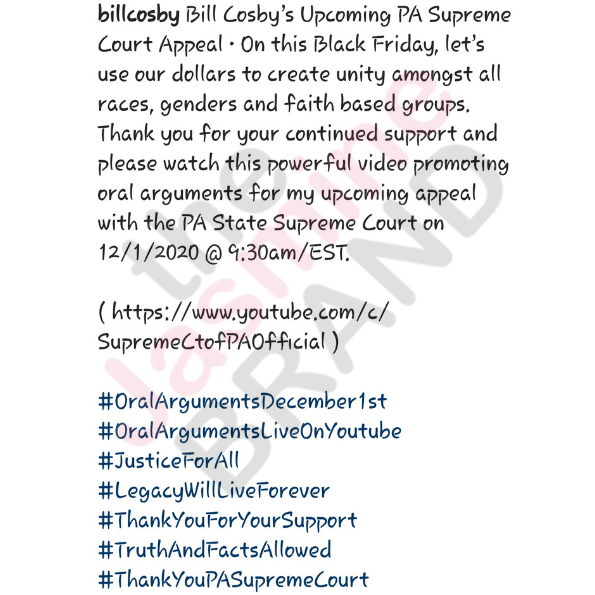 The video starts with Andrew Wyatt indicating that “these aren’t normal times.” The camera pans out and video is shown of a sign with a picture of George Floyd, the African-American man who died after being knelt on by former Minneapolis, Minnesota police officer Derek Chauvin, clips from the presidential debate between President Donald Trump and now-President-elect Joe Biden, and video clips of hospital workers appearing to assist patients infected with the coronavirus along with clips showing Andrew Wyatt and Bill Cosby walking into court.

As the clips are shown, Andrew Wyatt continues to speak indicating the uniqueness of today’s issues and appears to compare the injustices of police-involved crimes against African-Americans to what he refers to as the “unjust conviction and incarceration” of his client, Bill Cosby.

In this 21st century, we have witnessed the senseless murders of black men and women at the hands of a few bad law enforcement officers — but not all. We have witnessed the unjust conviction and incarceration of a true American treasure and citizen, actor-comedian Bill Cosby, and we are witnessing a pandemic unlike anything we have seen in our lifetime.

Andrew Wyatt proceeds to wish the viewers well on behalf of himself, his family, his client Mr. Cosby and his client’s wife Camille Cosby. Then, he surprisingly provides information about how viewers can tune in live via YouTube to:

watch oral arguments that will be presented by our appellant attorney, Jennifer Bonjean, before the Pennsylvania State Supreme Court.

These arguments will take place during the appeals proceeding for Cosby’s 2018 conviction that will be held on December 1 at 9:30 AM Eastern. Finally, he closes the video with:

On behalf of myself and Mr. and Mrs. Cosby, thank you for your love, your support, and may the Most High God continue to keep you and your family safe during these difficult times.

Will you tune in to watch Bill Cosby’s latest appeal hearing? What do you think about Andrew Wyatt’s video appeal to Bill Cosby’s followers? Sound off in the comments!