‘Eloise’ and the U.K. Version of ‘Dennis the Menace’ Getting Live-Action Adaptations 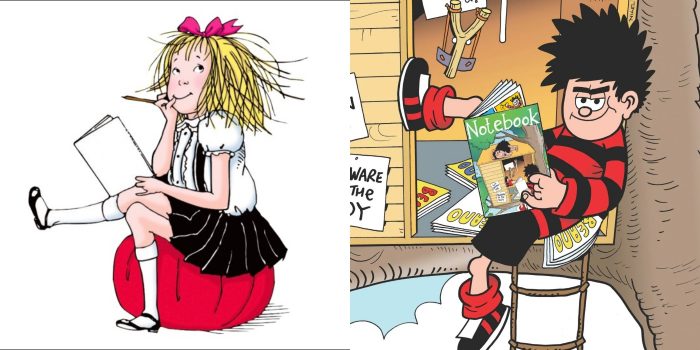 Variety reports that Eloise, Kay Thompson’s beloved children’s book about a misbehaving young girl who lives on the “tippy-top floor” of New York City’s Plaza Hotel, is getting adapted into a live-action movie.

Linda Woolverton is writing the movie for MRC Films, the independent studio behind Knives Out and Mortal Engines, which recently acquired the film, TV, and stage rights to the series. Neither a director nor a cast has been attached yet, but Woolverton expressed excitement over penning the adaptation in a statement.

“I couldn’t be more excited and honored to adapt Kay Thompson’s delightful book and character for the screen with MRC Film,”  Woolverton said. “I absolutely love Eloise for her mischievousness, her irreverence, her imagination and made-up words. Her playground, the Plaza Hotel, is an iconic symbol of all that’s wonderful about New York City.”

This isn’t the first time Eloise has been brought to the screen: the character got the live-action treatment in several made for TV movies, including Walt Disney TV’s Eloise at the Plaza (which starred Julie Andrews) and Eloise at Christmastime, both in 2003. An animated Eloise TV series called Me, Eloise! also ran on Starz Kids and the Family Network in 2006. The character may be lesser known to new generations, but she was a staple of many a childhood since Thompson (who may best be known for her brief acting career, appearing in Audrey Hepburn’s Funny Face) and illustrator Hillary Knight first began publishing the Eloise children’s books in 1955, following the troublemaking girl as she gets into all sorts of scrapes at the Plaza Hotel.

Another lesser-known childhood staple is Dennis the Menace — no, not that one. Did you know that in the U.K., comics writer David Law created a comic called Dennis the Menace the same year that the U.S. version was created by Hank Ketcham? Neither did I. By sheer crazy coincidence, two versions of Dennis the Menace debuted on both sides of the pond at the same time, though only one is really well-known in the States. Beano Studios wants to change that, developing a YA adaptation of the classic British comic book character, who, unlike his U.S. counterpart, is a delinquent teenager who actively likes to cause trouble.

Deadline reports that Beano is pitching a live-action series based on the DC Thomson-owned IP with a script by Matthew Berry, a writer on Netflix’s Chilling Adventures of Sabrina. And like that Greg Berlanti-produced series, this Dennis the Menace will be “dark” in tone, with the 16-year-old character “flitting in and out of trouble with the police.” Deadline compares the remake to the racy British drama Skins. The company is reportedly in talks with a series of U.S. studio partners to come on board the project.

While this sounds shocking to U.S. readers who know Dennis the Menace as a happy-go-lucky child who unintentionally causes trouble, it’s pretty in line with the original British character, who is a mean-spirited teen boy. Though the Skins comparison is the one new feature: it sounds like Beano wants their own version of Riverdale with Dennis the Menace — though if they don’t want mockery or confusion from U.S. audiences, they might be better off changing the name.

The post ‘Eloise’ and the U.K. Version of ‘Dennis the Menace’ Getting Live-Action Adaptations appeared first on /Film.

Source of the article : New feed at ‘Eloise’ and the U.K. Version of ‘Dennis the Menace’ Getting Live-Action Adaptations