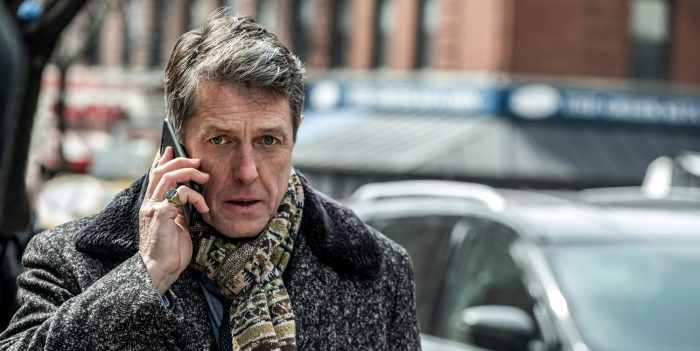 Hugh Grant has found his new niche playing the baddie. After shedding his rom-com leading man persona to play the flamboyant villain in Paddington 2 (in what is arguably his best role to date), Grant is digging deeper into the dark roles that are being offered him, recently coming off playing the sociopathic antagonist of David E. Kelley’s HBO series, The Undone. And he’s got one more under his belt, the actor teased, revealing that his next project will be a “mockumentary about 2020” from Black Mirror creator Charlie Brooker.

In an interview with Vulture discussing the finale of The Undone, Grant revealed that he already has his next gig lined up. And interestingly, it’s in keeping with his dive into the more unseemly roles since he’s made a hard left turn from romantic leading man to scene-stealing villain. Grant told the outlet that he will star in Charlie Brooker’s “mockumentary about 2020” as a “historian who’s being interviewed about the year”:

“I’m doing a thing tomorrow, actually. Charlie Brooker [the creator of Black Mirror] has written a mockumentary about 2020. It’s for Netflix, and I am a historian who’s being interviewed about the year. I’m pretty repellent, actually! And you’ll like my wig.”

This is all kinds of intriguing. Brooker is a very cynical writer who is undoubtedly capable of crafting any manner of despicable characters for Grant to play, and it seems to be something that the actor is reveling in — describing his character as “repellent” and donning a (probably ridiculous) wig to play it. Brooker’s work in Black Mirror, a sci-fi anthology series that is deeply suspicious of technology, suggests that this mockumentary will be a comedy of the blackest degree, which will allow Grant to be as over-the-top as he wishes. And since this project is under Netflix — which Brooker has formed a close partnership with since moving Black Mirror over to the streamer — it will likely be star-studded and big-budgeted too.

There’s no official confirmation about Brooker’s Netflix mockumentary yet apart from Grant’s tease, but it will likely be under the deal that Brooker and Annabel Jones’ production company have with the streamer.

I’m not sure I want a Brooker mockumentary about 2020 (the year isn’t bad enough that we need one of the TV industry’s most famous cynics to turn it into a comedy?), but I’m all for Grant doubling down on the villainous roles after giving an all-time performances in Paddington 2 and continuing the streak in scene-stealing roles in The Gentlemen and now The Undone.

The post Hugh Grant is Set to Star in a Netflix Mockumentary About 2020 From ‘Black Mirror’ Creator Charlie Brooker appeared first on /Film.

Source of the article : New feed at Hugh Grant is Set to Star in a Netflix Mockumentary About 2020 From ‘Black Mirror’ Creator Charlie Brooker