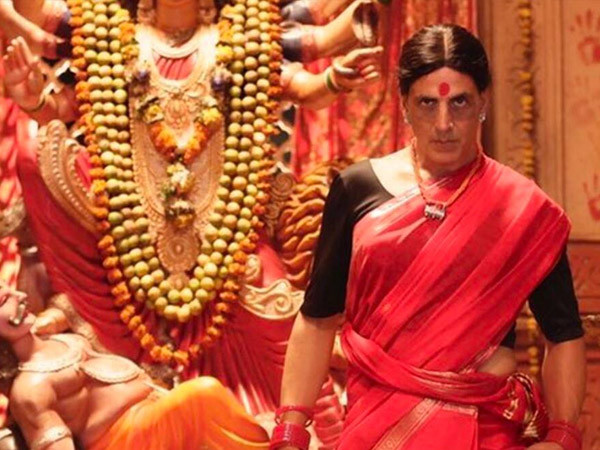 Rashmi (Kiara Advani) is married to Asif (Akshay Kumar) a small businessman who sells tiles and granite. Their inter-religious marriage has alienated Rashmi from her family, especially from her father (Rajesh Sharma). Asif is an atheist who works to eradicate superstition from society in his spare time. He doesn’t believe in the existence of ghosts and in the initial few minutes we see him exposing a false godman. At the insistence of Rashmi’s mother (Ayesha Raza Mishra), they go to Daman to celebrate the wedding anniversary of her parents. Asif vows to reconcile Rashmi to her father and his good nature kind of wins his father-in-law over. Everything seems to be going well, till Asif gets possessed by a vengeful spirit. He starts behaving oddly and things go downhill from there for all concerned.

Raghava Lawrence has rejigged his own hit Tamil language film Kanchana (2011) as Laxmii. He’s made many changes to the original while keeping the basic plot intact. It’s basically a revenge story with a supernatural twist. There’s not much to the plot, however. You know where the film is going once the secret is revealed. The comedy part is pretty juvenile. Ashwini Raza Mishra and Ashwini Kalsekar slapping each other around like Laurel and Hardy is more or less the deal here. The usually reliable Rajesh Sharma too gets slapped once or twice. Raghava Lawrence seems to have taken the literal meaning of slapstick it seems and has used it liberally. If the comedy part is childish, the horror part won’t scare a child. The ghost looks like a mop painted black. While there’s an atmospheric built up, the final punch kind of deflates it. You simply don’t feel scared and that’s not something one should expect from a horror film. The writing is at fault here, really. Better attention to plotting would have made it into a cracker of a movie delivering both chills and laughter. The songs, barring the last one, are unnecessary. They kind of bloat the run time without adding any value to the film. Editing too could have been crisper. At close to two-and-a-half hours, it’s too long a movie. Culling away an hour would have turned it into a better film.

While there’s enough chemistry between Akshay Kumar and Kiara Advani, we get the impression that the director doesn’t want to exploit it. We don’t get to know them as a couple. Once they enter Daman, they are hardly together at all. It’s like their being a couple hardly matters to the movie. There isn’t even a scene of Kiara getting scared by her possessed husband. One would have expected that she’d logically be the most affected.

The film does raise the point that transgenders are as much part of society as any other person and their rights should be respected. And that we should broaden our spectrum of what’s normal. Kudos to the director for bringing that up and making the right noises about it. It’s all done in an over the top manner but still, we should nitpick much as a point is being made, that too in a commercial set up. Sharad Kelkar has done a fine job playing a eunuch.

We sit through the proceedings because of the energy Akshay Kumar brings to his role. He has this knack of making the most mundane of things sound interesting. You munch placidly on the popcorn in the hope that things might brighten up in the next reel. The climax, where he dances with hundreds of transgenders, is one such bright spark. The problem is that there aren’t enough of such moments in the film. Kiara Advani looks pretty as a peach but shouldn’t she start looking for films where she has more to do?

Laxmii is an OTT release. The real test of its prowess would have been a theatrical release. Would the viewers watch a film because of a star’s charisma or for its content? That’s the question the industry should be ready to face in the near future…

Source of the article : New feed at Laxmii Movie Review