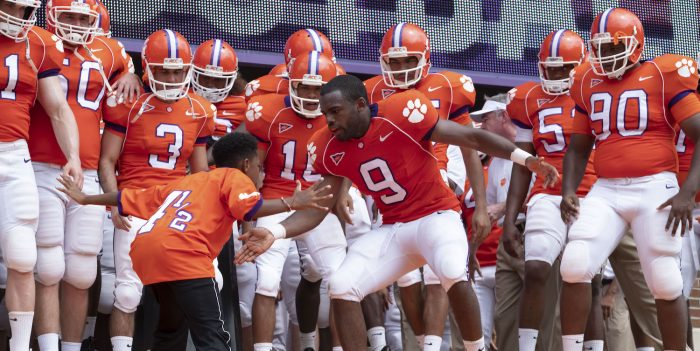 Disney is never lacking in inspirational true-life stories, and now, neither will Disney+. The Disney streaming platform released the trailer for its latest original film, Safety, an inspirational sports drama based on the true story of former Clemson University football safety Ray McElrathbey and how he raised his 11-year-old brother while becoming a football star. Watch the Safety trailer below.

They say it takes a village to raise a child, but in the case of Disney+’s new original film, Safety, it takes a college football team. The upcoming inspirational sports drama is “inspired by the empowering true story of former Clemson University football safety Ray McElrathbey, a young man facing a series of challenging circumstances, whose dedication and persistence help him to triumph over repeated adversities. Aided by his teammates and the Clemson community, he succeeds on the field while simultaneously raising and caring for his 11-year-old brother Fahmarr.”

Directed by Reginald Hudlin (Marshall) from a screenplay by Nick Santora (The Most Dangerous Game,   The Fugitive), Safety stars Jay Reeves (All American, The Tax Collector) as Ray and newcomer Thaddeus J. Mixson as his brother Fahmarr. The cast is rounded out by Corinne Foxx, Matthew Glave, Hunter Sansone, Amanda Warren, Miles Burris, Isaac Bell, Elijah Bell, and James Badge Dale.  It is and produced by Mark Ciardi (Secretariat) and Gordon Gray (The Rookie ) with Douglas S. Jones and Campbell McIinnis serving as executive producers.

In a statement, Hudlin said, “Safety is a movie about brotherhood and coming together for the greater good, which is a message our society needs right now.  It’s the story of a young man stuck in a situation where failure is not an option. Through sheer force of will, he does the impossible, which inspires the whole community around him to do the same.  It’s a movie I can’t wait to watch with my family on Disney+ on December 11th, and for families everywhere to do the same.”

Producer Mark Ciardi added, “For over a decade, I’ve dreamed of bringing Ray’s incredible story to the screen, and now that it’s ready, I’m thrilled that Disney+ is making it available for families to enjoy together during the holidays.”

The film looks like a good, old-fashioned inspirational sports drama, which means it’s perfect for the family-friendly base that Disney+ caters to. I can’t say I’m personally all that interested in Safety, but there must be some intersection of Disney fans and Clemson fans for whom this movie is specifically made.

Safety will debut exclusively on Disney+ on Friday, December 11, 2020.