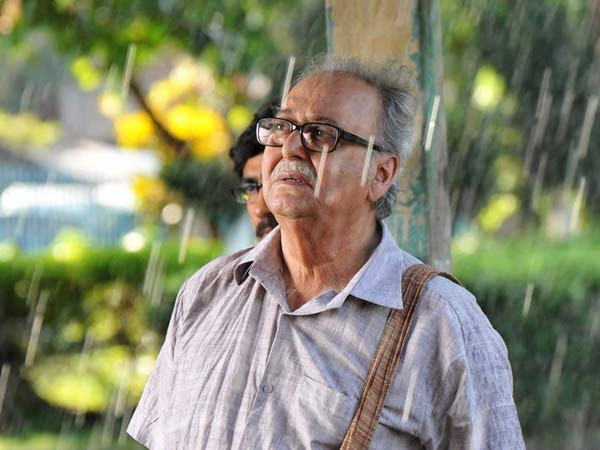 Remembering the legend, we bring to you our last interview with the veteran actor. Exerpts… 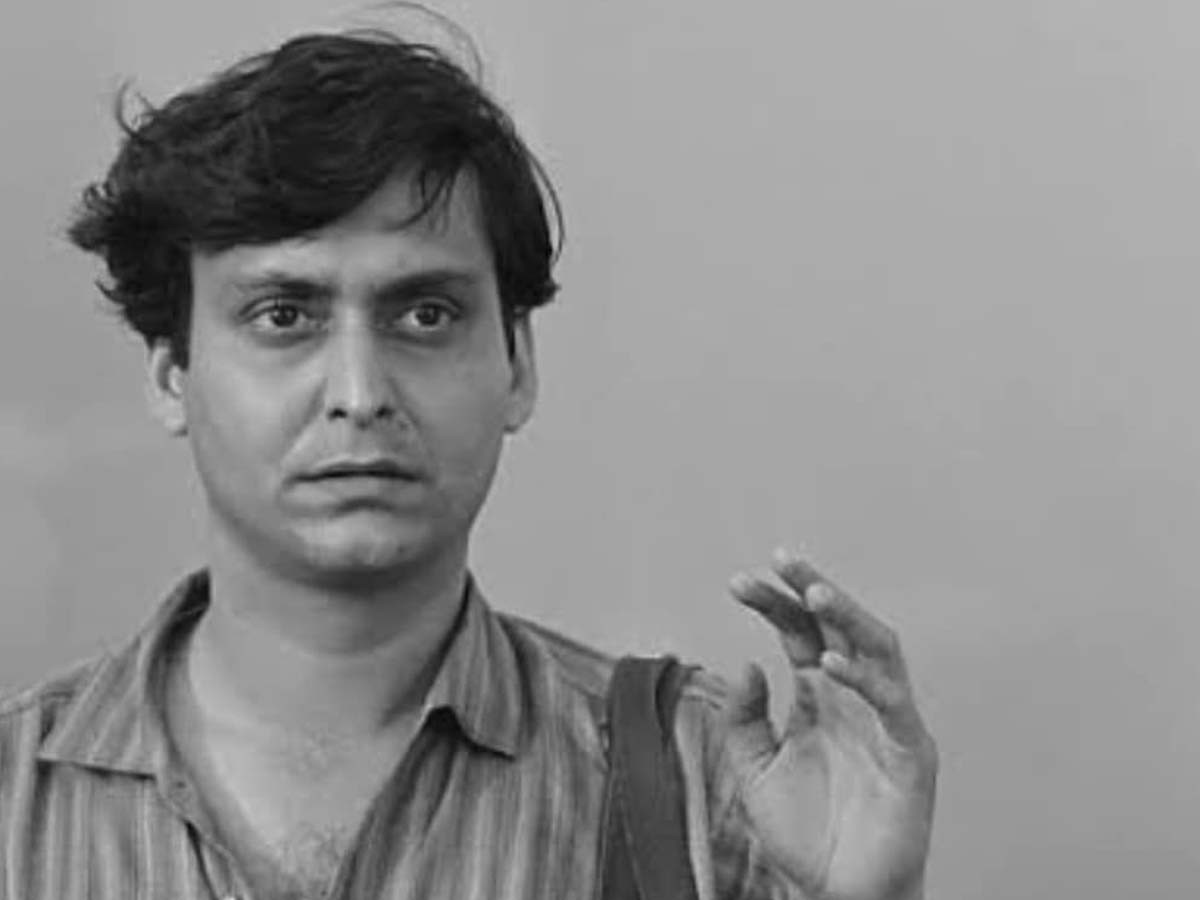 As a child I suffered from an inferiority complex. But not to the extent of being called pathological. In my family everyone was good-looking. I feared I wasn’t good-looking enough. They’d wonder where this dark child came from. It would upset me but acting gave me the scope to hide myself. My father (lawyer and an amateur actor) encouraged us to act, recite poems…That gave me a push to go in this direction.

I was admired in my class. I played football, hockey, cricket… I forged friendships in school. I loved being with people. But one habit that actually saved me was reading books. At home, I was given books to stop me from playing pranks. Today, I can’t travel without a book. From being a high court advocate to a government servant, my father had transferable jobs. When we came from Howrah to Kolkata, the city opened windows. I was exposed to Kolkata theatre.

My parents, particularly my father, took me to see Sisir Kumar Bhaduri (theatre personality) perform. He said if you’ve not seen Sisir Kumar Bhaduri performing, then you’re losing out as much as a Bengali would by not reading Rabindranath Tagore. I’m yet to come across an actor of his stature. He was encouraged by Tagore himself. Sisir Kumar revolutionised the Bengali stage. None had that vision. Even Satyajit Ray was impressed by his skills. He wanted him in one of his films but he declined. He’d say cinema is yet to be born. He believed only one artiste had been born out of cinema, that is Charles Chaplin. Others he wouldn’t acknowledge. When Satyajit Ray asked him for one of his films, he said that in films it’s only the director who acts, why do you want me?

In college, we had some prominent professors. One of them was Narayan Gangopadhyay, a famous novelist. He had written a play on Raja Ram Mohan Roy. The first staging of that play was done in college. I played Raja Ram Mohan Roy. Narayan then remarked that someday I’d be great actor. 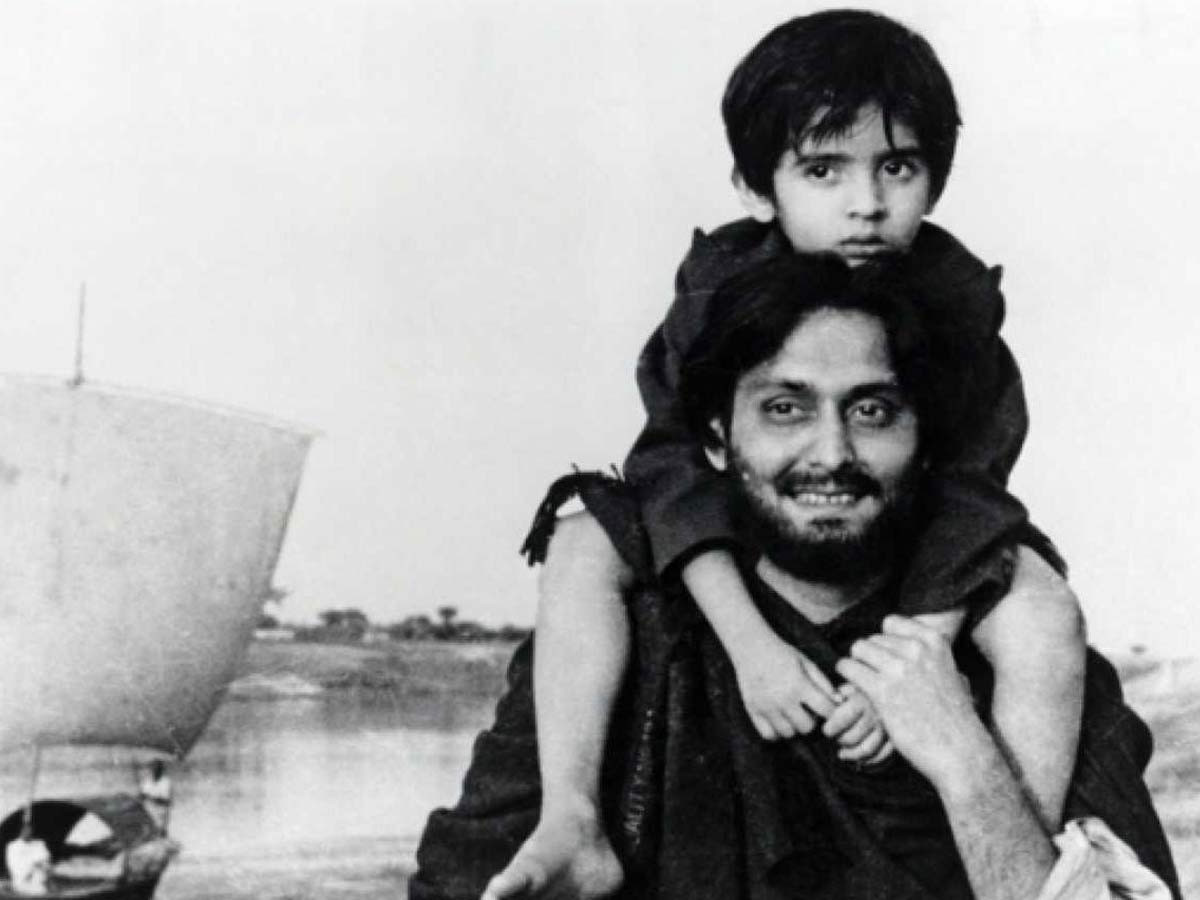 The ‘ray’ of light

Satyajit Ray discovered me. He had an intelligent judgement of human character. He could sense my capabilities. Actually, most of my directors gave me freedom to do what I deemed fit. And the greatest of them all, Satyajit Ray, too gave me a lot of freedom. He was unafraid that I’d misuse the freedom. He could trust me just as I trusted him. If I did something wrong he’d point it out, ‘Hey don’t do that. Do this’. He also knew how much he could get from me. That’s why he cast me in more than a dozen films (including Apur Sansar, Abhijan, Charulata, Aranyer Din Ratri, Sonar Kella as Feluda and Joi Baba Felunath and Ghare Baire)

My association with Ray is a rare thing. It’s a landmark in world cinema. There have been collaborations of beautiful magnitude like that between filmmaker Akira Kurosawa and actor Toshiro Mifune. But such a long association where I became almost Ray’s mouthpiece or his face on the screen is rare. Regarding work, we hardly differed. Maybe in private life, we may have differed on a particular thing. We had many things in common like our interest in art, our legacy of Tagore, our attitude towards life. That kept us together.

Why should I write my autobiography? In the first place, what do I write about myself? It’s no use dropping names, showing off that I have been there and done that. The inner man should be discovered in my work. Besides, my extraordinary experiences are private and personal. In our society, it’s difficult to write about them. People have dual standards. We can’t place our cards on the table. People won’t be able to accept that. I wouldn’t have cared had I had no concern for the mental wellbeing of those whom I love. I wouldn’t want them to be disturbed.

I’ve written three volumes of prose, where there many articles on cinema, acting, theatre. Youngsters have social admiration for me, like this man is an icon. But no one has come to me for advice about acting. Ironically, those who have benefited don’t live in Bengal. I feel great satisfaction knowing Naseer’s (Naseeruddin Shah) growth as an actor was much inspired by my career. He once told me, ‘Dada my life will be fulfilled if I can inspire someone the way you’ve inspired me’. (Laughs) I’m sure some of the Bengali actors also have learned from me. (Smiles) But somehow ghar ki murgi daal barabar.

Soumitra, the person, is more interesting than the actor. I’ve lived long enough. I’ve completed poetic works, plays… Those connect with me as a person. Of course, acting comes to me naturally. I’ve suffered for it. I’ve given my energies to it. While writing a poem may come or not come. But when it comes, it’s a great reward for your soul. My inner revelations lie in my writing. 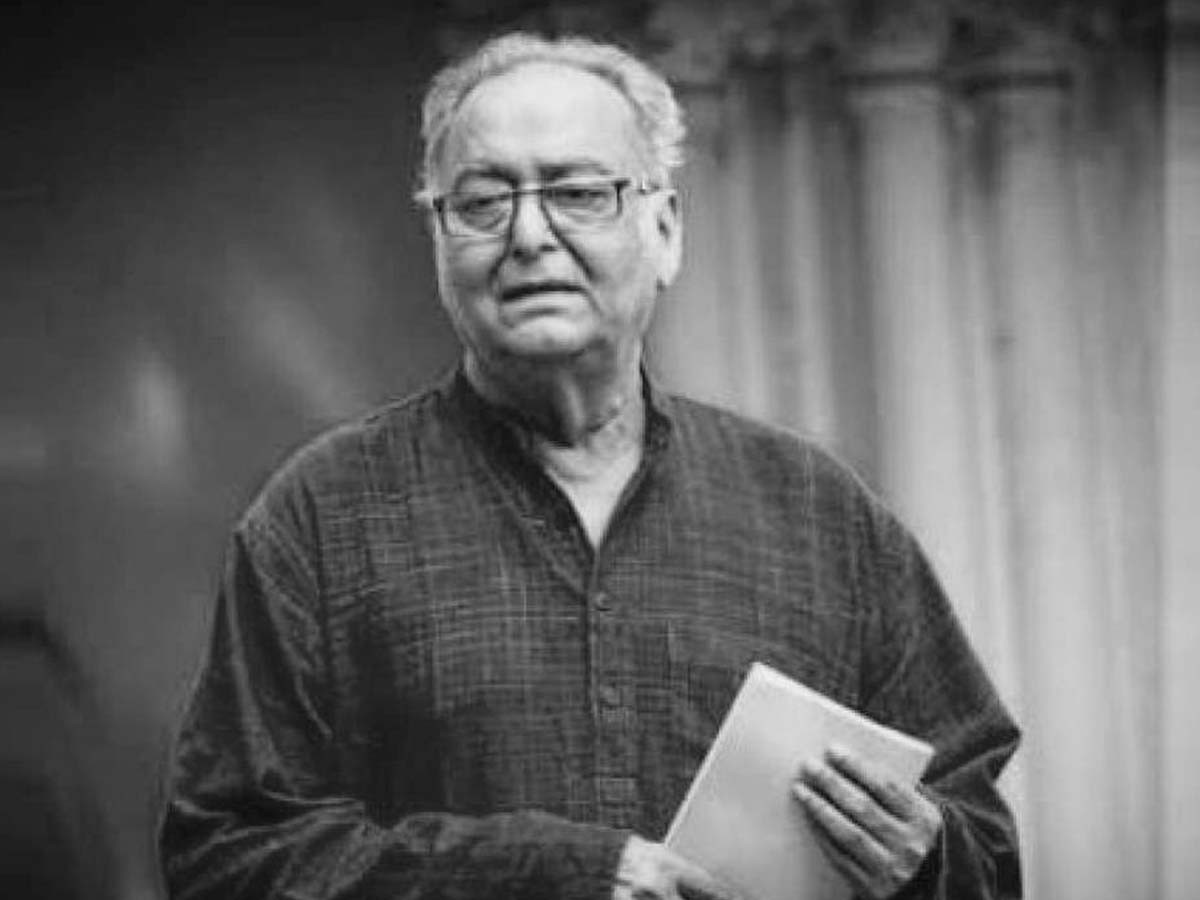 Do you think age will permit my entry into Bollywood now? I’ve worked in three-four short Hindi films, the recent one being Ahalya. But I should have started earlier. Speaking Hindi and memorising the dialogue would have been easier while I was young. With age you grow confident with your weapons but your limbs become tired and old. If I get a good script and a dependable director or even a co-actor like Irrfan (Khan) – I can just depend on him because he’s so good – it would be nice. In Indian cinema, he’s the best right now. I hope he comes back soon. Earlier I enjoyed the cinema of Hrishikesh Mukherjee. Yusuf bhai (Dilip Kumar) wanted me to play a part in Aadmi, which was finally done by Manoj Kumar. Raj Kapoor wanted me to be in Sangam, the role later done by Rajendra Kumar. But then, I wasn’t interested in Hindi films. The films made those days didn’t appeal to me.  Language is a matter of worship for me. And being young and foolish I believed money was not so important. 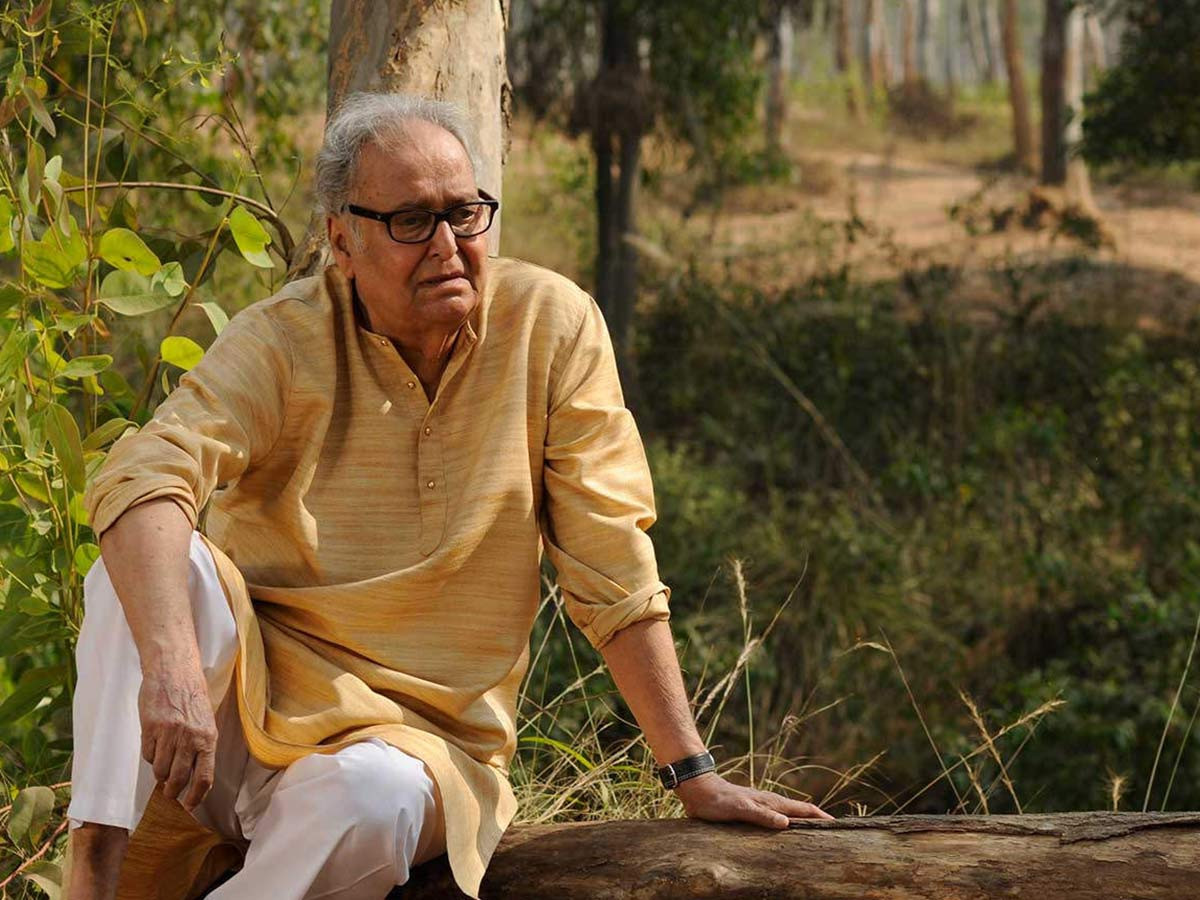 I get up at about 6 am. Earlier I used to exercise. But today my heath doesn’t allow me even a morning walk. I get out of breath walking even a short distance. I do some free hand exercises and get ready for work. Or I read and write. I’m not altogether happy today because I’ve had my share of bad luck. For instance, the latest incident has been a rude shock in my life. My grandson (actor/musician Ronodeep Bose), who was coming up brightly on the Bengal film scene, a handsome and promising boy, met with a bike accident two years back. He suffered serious brain injury. For the last two years he’s been bed-ridden. He has regained many faculties of his brain except speech. He cannot speak, he cannot stand. That has completely shattered us. Also, about four months prior to the accident, my wife (Deepa Chatterjee), who’s 80, fell down and crushed her spine. Though, she can walk now. My son (Sougata Chatterjee) and daughter (Poulami Bose) are deeply engrossed in art and literature. My son plays Western classical violin. He’s written books of poems. My daughter was a Bharat Natyam dancer. Today, she directs plays. We all have gone through much but guess one has to move on. Today, I have to take care of financial responsibilities with my grandson living with us. Now I realise, that had I concentrated on money earlier, I’d have felt secure today. I wouldn’t have remained insecure like any damn bloody actor!