You Get What You Need. 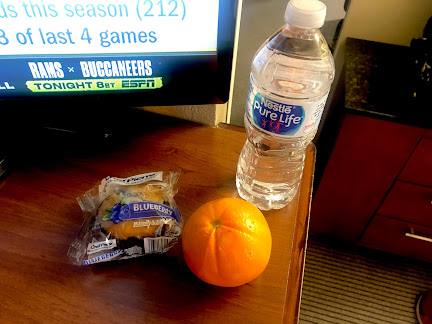 I’m like a mother bear defending her cubs, only I’m defending the fresh pan of bacon from other hotel guests at the breakfast buffet.

During COVID, the continental breakfast Belgian waffles drizzled with syrup that are featured on the Hyatt Place’s online pics have been replaced with a thrice-stapled brown bag “walkaway breakfast” consisting of bottled water, an orange and a sweaty muffin.
It’s 51% bitter, 49% sweet to be back in Dallas. When I lived here, the part of my brain that helps curb impulsive behavior had not yet fully developed. After breakfast yesterday, I cruised over to find my old apartment. It was located in a thatch of 10,000 garden-style places known collectively as “The Village,” and segmented into such overpromising neighborhood names as “The Lakes” and “Upper East Side.”
Living in The Village was something you hesitated to share with people. It served its purpose – for $400/month, I had an okay place with tons of free parking, access to dozens of pools, a gym, a restaurant and I played on an intramural-like men’s softball team. But I wasn’t winning. Yesterday, after 45 minutes of confused walking around the maze that is The Corners, I realized my apartment was no longer there. The complex had been cut in half to build a slightly fancier brick-faced/garage parking segment called “Dakota.”
I drove back to my hotel, and thought about my life in the apartment that is no longer there. Back then, I was verbally abused professionally by some shitbag guys, dated a full-on bitch before letting her break my heart and a Ford salesman sold me a used Mustang financed at 14.5%, assuring me that was a normal rate. These days, I wouldn’t put up with any of that for two seconds. Me today and me back then are Matt Shevin by name only.
I love living in LA. I’m wired for it. I love my career and my dog and the beach and that my brother and his family live so close by. I became who I was meant to be there. As sentimental as I thought I was, I learned a good lesson yesterday. May we all have our bad memories bulldozed.

Source of the article : New feed at You Get What You Need.