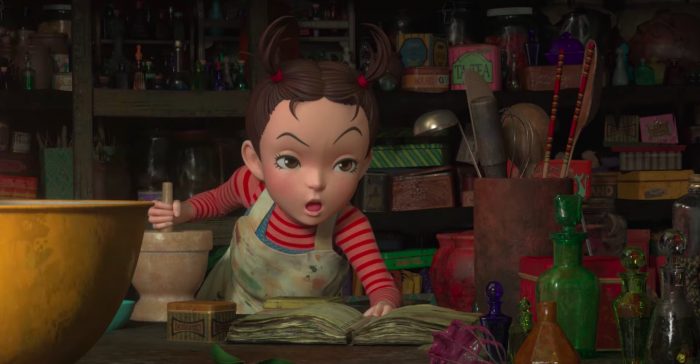 The first-ever CG animated film from Studio Ghibli is getting a lot of press for the anime studio – beloved for 2D classics like Spirited Away and My Neighbor Totoro – as they enter the unknown territory of 3D animation. And U.S. distributor GKIDS is pulling out all the stops for Earwig and the Witch, directed by Hayao Miyazaki’s son Goro Miyazaki, by recruiting a star-studded English voice cast which includes Richard E. Grant and Kacey Musgraves. Watch the new English dub Earwig and the Witch trailer below.

Earwig and the Witch Trailer

I have to confess to you guys: every time I watch a new trailer for Earwig and the Witch, I get a little sad. Every new piece of marketing is a stark reminder of how shoddy the CG animation looks and how flat the colors are — exactly the opposite of what I anticipate from a new Studio Ghibli film. So I end up subconsciously blocking the movie from my mind, until a new trailer comes out and I’m reminded of my disappointment all over again.

But we’re in the business of the benefit of the doubt, and goodness knows I have plenty of room for that for a Studio Ghibli movie. Sure, Goro Miyazaki’s track record is less than stellar, but it’s never been bad per se. His debut film Tales From Earthsea was an empty, but beautiful, mess — clearly the work of a new filmmaker eager to emulate the works of his father, that titan of anime Hayao Miyazaki. But while Goro did an excellent job at recreating the look of a Miyazaki film, it was devoid of the spirit that made his father’s films like Spirited Away, Princess Mononoke, and Howl’s Moving Castle such transporting classics. His follow-up film From Up on Poppy Hill was a marked improvement, and felt like there was a little life beating behind the previously cold, lifeless eyes of Goro’s characters.

So it’s a little deflating that that tiny spark of potential, of life, appears to be quashed by the uncanny CG animation of Earwig and the Witch, which is clearly animated to match the house style of a Ghibli film, but with technology that makes the characters (and their hair) look incredibly stiff. The one saving grace is the detail put into the background animation and still items (look at that beautiful notebook!) which may not be a surprise, considering Goro came to anime filmmaking from the architecture field and showed a great talent for designing breathtaking locations in Tales From Earthsea. But Ghibli is all about the characters, and I only hope they pop in personality to make up for their design.

In the English dub version, the characters are voiced by Taylor Paige Henderson, who plays title character Earwig, an orphan adopted by a witch, Bella Yaga (Vanessa Marshall). Also starring are Kacey Musgraves as Earwig’s magical mother, Richard E. Grant as the Mandrake, and Dan Stevens as Thomas the talking cat.

Earwig and the Witch will air in Japan on December 30, 2020 on NHK before GKIDS releases it in North America soon after.