‘Fast & Furious: Spy Racers’ Season 3 Trailer: Yep, This Show is Still On (And They’re Racing in the Desert Now)

Have you ever wondered what a Fast & Furious animated show might look like if things were A) even more wild than the regular insanity of the live-action movies and B) more than half of the mouth movements don’t align with the characters’ dialogue? Today is your lucky day, my friends. Netflix has unveiled the trailer for the third season (!) of Fast and Furious: Spy Racers, a show that follows the adventures of Dominic Toretto’s younger cousin Tony and his renegade band of…well, spy racers. Check out the trailer below, but be warned: it’s bad enough to make the worst parts of the live-action franchise look like poetic cinema.

Inspired by Universal’s blockbuster Fast & Furious franchise, teenager Tony Toretto follows in the footsteps of his cousin Dom when he and his friends are recruited by a secret government agency to take down nefarious crime organizations across the globe.

This season, when the menacing Cleve Kelso and his experimental storm satellites take down Ms. Nowhere and Gary during an operation in North Africa, Echo steps up as de facto leader, much to Tony’s chagrin, and the Spy Racers embark on a dangerous mission across the Sahara. Will they be able to save their crew or will Kelso and his league of villains be too powerful for the Spy Racers to survive in the harsh desert?

I have not seen an episode of this show, so I’m as surprised as you are to discover that Crocodile Dundee has lost his accent, pivoted to supervillain status, and is trying to bring the entire world to its knees with storm satellites. Can’t say I saw that one coming. The rest of it – giant mech suits, laser-shooting robot arms, ramping off a sand dune into an electrical hurricane – seems just a bit outside even the live-action franchise’s tenuous grasp on reality, but I guess I can’t fault them too much if they’re just trying to keep kids entertained. But seriously, though: what’s up with the mouth movements? Did they just re-record new audio over existing footage throughout this entire trailer to set up the storyline for the season, and hope that kids would be too dumb to notice? Well played, I guess! 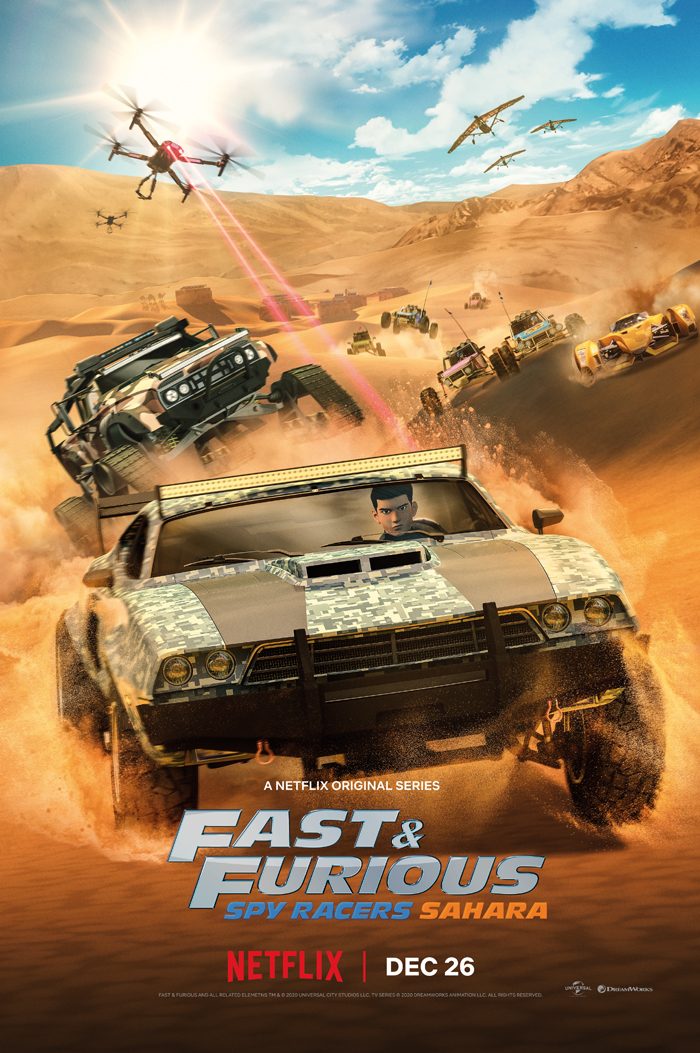 All 13 brand new episodes of Fast & Furious: Spy Racers season 3 arrive on Netflix on December 26, 2020, just in time to lounge in a post-Christmas bliss and inject this insanity directly into your skulls.

The post ‘Fast & Furious: Spy Racers’ Season 3 Trailer: Yep, This Show is Still On (And They’re Racing in the Desert Now) appeared first on /Film.

Source of the article : New feed at ‘Fast & Furious: Spy Racers’ Season 3 Trailer: Yep, This Show is Still On (And They’re Racing in the Desert Now)