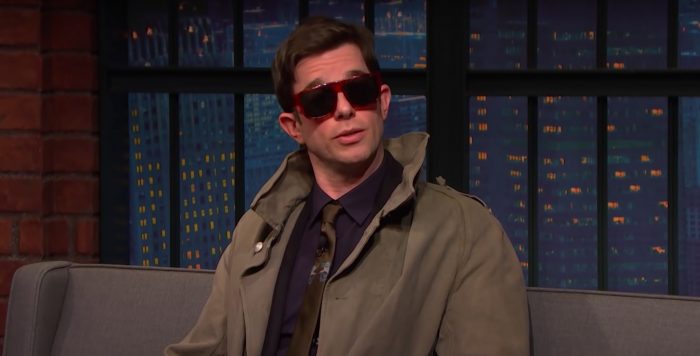 John Mulaney may look like a very tired tall child, but that didn’t stop the Secret Service from taking his jokes a little too seriously when the comedian appeared on Saturday Night Live back in February. During his monologue, a harmless joke about leap years and Julius Caesar put the comedian on the radar of the Secret Service, who interpreted his joke as a potential death threat against Donald Trump. It makes the latest backlash against the comedian — also relating to a poorly made SNL joke — seem like child’s play.

During an interview with Jimmy Kimmel Live! Tuesday, Mulaney talked about backlash to his jokes — one of which was on a national security scale. A joke he made during his SNL monologue back in February earned him the attention of the Secret Service, which launched a probe into him, Mulaney revealed.

“In February, I did a joke that was not about Donald Trump. The joke was about how it was a leap year, and leap year had been started by Julius Caesar to correct the calendar, and another thing that happened with Caesar was that he was stabbed to death by a bunch of senators because he went crazy. And I said I think that’s an interesting thing that could happen.”

But since the comment made no direct mention of Trump and Mulaney hadn’t penned any “manifestos” or “rants” against the president online, he was given the all clear and and not deemed a national security threat. “The person vetting me was very understanding that the joke had nothing to do with Donald Trump because it was an elliptical reference to him,” Mulaney said. “I didn’t say anything about him. In terms of risk assessment, no one who’s ever looked at me thought I registered above a one.”

It’s ironic that his Julius Caesar joke (a pretty funny one, if I remember!) was what landed him in hot water with the government, because a joke from his more recent SNL appearance got him in hot water on the internet. In the opening monologue, Mulaney made the mistake of claiming that “no matter who wins” the election, things will remain the same, including economic depression, drug addiction, Jane Lynch booking every gig, and children leaving sleepovers early because their stomachs hurt. Told on the eve of the election, many people took this as bad form from the usually politically astute Mulaney, which the comedian acknowledged:

“In the setup, I said, ‘No matter who wins,’ which I really didn’t even agree with. I often say things on TV in front of 10 million people that I’m just kinda floating as ideas. I should have said, ‘I very much want one to win over the other, and there will be improvements if one wins.’ And I flat-out deserve the backlash. I flat-out forgot to do it. I ran the joke in a field in Connecticut and I was like, ‘Alright, let’s rock and roll,’ and I never was like, ‘Hey, don’t you mean that one guy’s worse than the other?’ And I forgot to make the joke good. So the beginning was a strange thing to toss out there three days before an election in front of a lot of people going, ‘Look, it doesn’t matter who wins because, and now I’ll get to the Jane Lynch joke.’ My wife, everyone who knows me was like, ‘What the hell did you just say?’ And I was like, ‘What, no good? No good?’ There’s no excuse for not working out the wording of a joke that you then do on television.”

Check out the full clip of Mulaney explaining his comedy missteps below:

The post John Mulaney Says He Was Investigated by the Secret Service After An ‘SNL’ Joke appeared first on /Film.

Source of the article : New feed at John Mulaney Says He Was Investigated by the Secret Service After An ‘SNL’ Joke