Keke Palmer Opens Up About Her Struggles With Acne & PCOS [Photos] 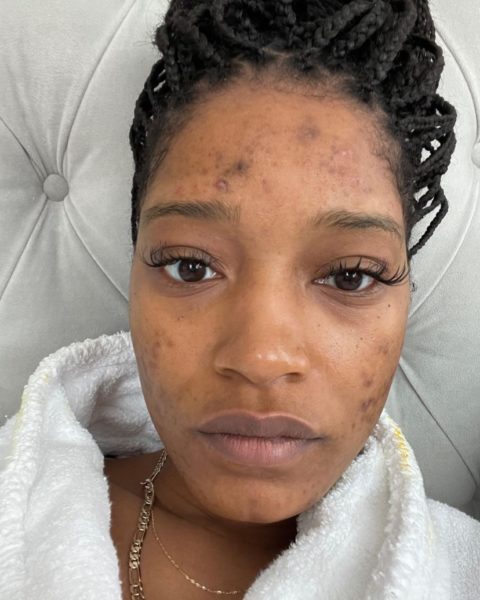 Keke Palmer Opens Up About Her Struggles With Acne & PCOS

Keke Palmer, 27, is opening up about her struggles with polycystic ovarian syndrome (PCOS) and acne. In in a lengthy caption and unfiltered, she explained,

“Hey you guys, for some of you this may be TMI, but for me my platform has always been used for things much greater than me. Poly Cystic Ovarian syndrome has been attacking me from the inside out my entire life and I had no idea.”

Keke explained that because of this she has severe acne.

“My acne has been so bad that people in my field offered to pay for me to get it fixed. I tried EVERYTHING. I did Accutane TWICE. People say drink water, have a better diet, but I did all that, I ate all the ‘right’ things, my blood tests were fine. But it took ME taking a personal look into my family that has a history of diabetes and obesity, to understand what was ACTUALLY happening with me. And unfortunately doctors are people and if you don’t ‘look the part’ they may not think that’s your problem. They may not even suggest it if you ‘look healthy’ whatever that means! I came to a doctor in tears once and all they offered was a measles vaccine… Exactly.” 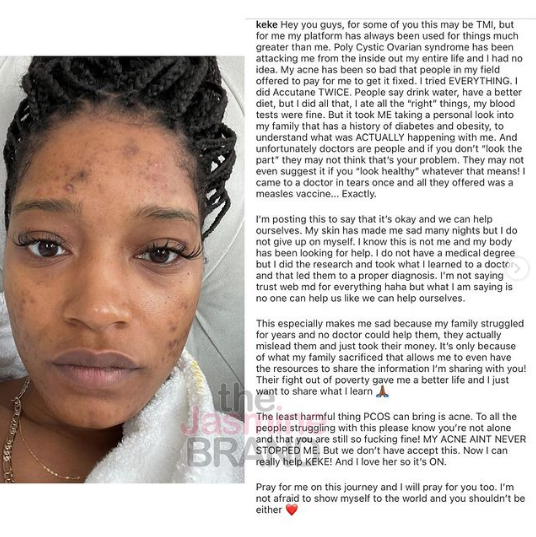 Polycystic ovarian syndrome (PCOS) is an endocrine disorder in which levels of reproductive hormones such as estrogen and testosterone are imbalanced. It can trigger a wide range of symptoms, including (but not limited to) irregular periods, migraines, facial hair growth, weight gain, insulin resistance, painful periods, ovarian cysts, and fertility problems. PCOS affects as many as one in 10 women, and is the leading cause of infertility in the United States, according to the National Institutes of Health.

What are your thoughts about Keke’s condition? Let us know in the comments.

The post Keke Palmer Opens Up About Her Struggles With Acne & PCOS [Photos] appeared first on theJasmineBRAND.

Source of the article : New feed at Keke Palmer Opens Up About Her Struggles With Acne & PCOS [Photos]