Some things in life seem irreplaceable, and right now for rapper Swae Lee (born Khalif Malik Ibn Shaman Brown) one of those things is his hard drive that went missing during a recent flight.  He initially posted that he would reward $20k for anyone who found the hard drive that has all of his songs on it. 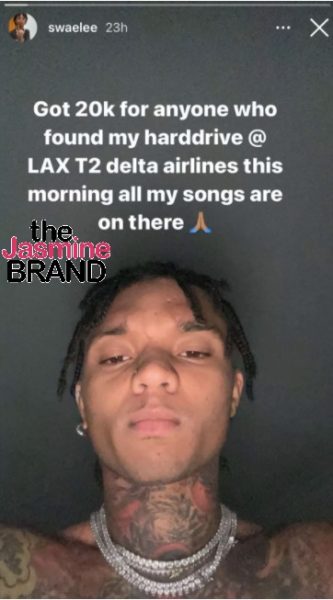 Later, the rapper upped the amount to $50k.  He tweeted,

The “Reality Check” star is one half of the duo Rae Sremmurd, which was formed with his sibling Slim Jxmmi.

Hopefully, someone is able to return his belongings.

What are your thoughts on Swae Lee’s offer? Comment and let us know.

The post Swae Lee Is Offering $50k For The Return Of His Hard Drive With All Of His Songs appeared first on theJasmineBRAND.

Source of the article : New feed at Swae Lee Is Offering k For The Return Of His Hard Drive With All Of His Songs