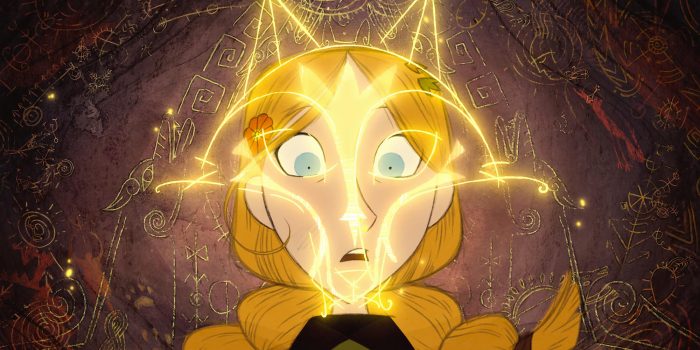 (Welcome to The Quarantine Stream, a new series where the /Film team shares what they’ve been watching while social distancing during the COVID-19 pandemic.)

Where You Can Stream It: Apple TV+

The Pitch: The daughter of a wolf hunter, Robyn, comes to Ireland with her father to wipe out the last pack. But when Robyn encounters a wild native girl, Mebh, their friendship leads her to discover the world of the Wolfwalkers and transform her into the very thing her father is tasked to destroy.

Why It’s Essential Viewing: There’s a tendency to ignore any animated movies that don’t come from Disney or Pixar, and write off the rest as either too arthouse or too kiddy. And it would be a real shame if anyone did such a thing with Wolfwalkers, the latest masterpiece from Cartoon Saloon, the Irish animation studio behind such films as The Secret of Kells, Song of the Sea, and The Breadwinner. The culmination of Cartoon Saloon’s works, Wolfwalkers is a stunning, breathtaking paradigm of 2D animation as well as a heckuva entertaining adventure flick.

Princess Mononoke meets Brave in Wolfwalkers, the last of Cartoon Saloon’s Irish folklore trilogy, which take inspiration from the country’s long cultural history to create new art. And art is what Wolfwalkers certainly is: every frame a painting, every piece of motion like watching someone’s brush strokes come to life. Where there was a slow-burning, arthouse prestige to Cartoon Saloon’s past films like The Secret of Kells and Song of the Sea, Wolfwalkers bursts with wild energy, threatening to erupt beyond the roughshod lines of the characters and the intricately detailed backgrounds with which they interact, and spill out of the screen.

The animation manages to tap into every physical sense and evoke a visceral feeling of awe, fear, excitement at every turn. In one of the most awe-inspiring sequences of the film, Robyn, after having been accidentally transformed into a Wolfwalker through Mebh’s bite, sees the world through “wolfvision” for the first time, in an almost synesthetic scene that bathes the screen in starry trails of light — showing the scents of animals and people — amid a trippy black light that envelopes the frame.

But Wolfwalkers does something even more amazing than give us god-tier animation. It manages to make a good movie out of an animal transformation story (arguably one of the weakest tropes in animated movies) by digging into the Irish folklore that inspired it. After getting accidentally bitten by the feral girl Mebh, Robyn finds herself able to transform into a wolf when she falls asleep. Rather than go through various hijinks and personal obstacles to change back, she wholly embraces her newfound freedom and her existence as one of the last members of a dying breed. The film’s melancholy undercurrent is one of change. People are forgetting the Wolfwalkers, and they themselves are the last bastions of a dying culture. But even as the forest that the wolves live in disappears, and people forget their traditions and myths, Wolfwalkers shows there’s still a little bit of magic left in the world, hiding in the dark.

Source of the article : New feed at The Quarantine Stream: Start Taking Animation Seriously With the Year-Best ‘Wolfwalkers’