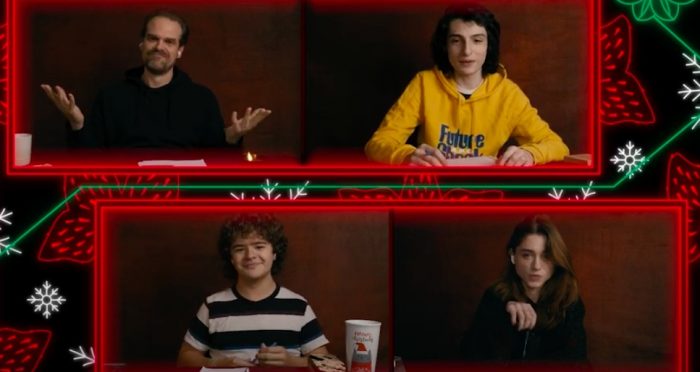 Dungeons & Dragons just got a whole lot stranger. Four cast members of Netflix’s hit sci-fi show Stranger Things sat down for a game of the tabletop RPG for a special actual play session, lead by Wizards of the Coast principal story designer Chris Perkins. Stranger Things stars David Harbour, Finn Wolfhard, Gaten Matarazzo, and Natalia Dyer participated in the session as a holiday gift to long-suffering fans, who have been waiting nearly two years for the next season of the Netflix show. They’ll have to wait a bit longer, but hey, how about some D&D?

The actual play event, titled Lost Odyssey: Toy Time for Ten-Towns, takes the heroes on an adventure to the frozen north of Icewind Dale, the setting of the recently released Rime of the Frostmaiden (which even comes in a deluxe edition), to save Christmas. The two-hour session probably won’t get into that deluxe pack, but there will be plenty of role-playing hijinks and a few monsters they meet along the way (though probably none that they recognize from the characters’ D&D sessions in the show).

This is the first time the cast of Stranger Things have done a big actual play session of Dungeons & Dragons like this, which is kind of a surprise considering the show owes a lot to the RPG franchise. The game is what introduces us to the main characters, and also helped shape the arc of the first season, with the characters naming some of the monsters they encounter after the creatures from the game. Netflix has been wise to the game’s impact, with an officially licensed D&D starter set themed to match the adventure from the first season, complete with a miniature Demogorgon.

Source of the article : New feed at Watch: The ‘Stranger Things’ Cast Get Festive While Playing Dungeons & Dragons