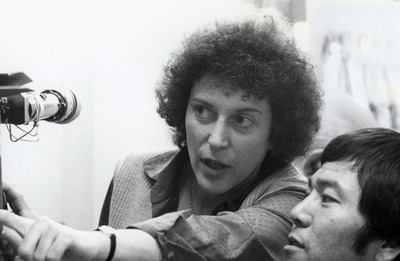 The lived-in details always made Joan Micklin Silver’s films pop. Silver, who died yesterday at 85 of vascular dementia at her Manhattan home, was a pioneering director in many ways. But she was a storyteller and humanist first. You always got the sense that the eyes and mind guiding her camera weren’t just thinking in vague abstractions about how to “bring a script to life” and move the plot along. She infused her films with connectedness to lived experience.

That the experience often took the form of a comedy or drama rooted in reality, and tended to focus on Jewish Americans, women, and hyper-educated but rudderless Baby Boomers, meant Silver had to beat impossible odds time and again in order to realize her vision. Despite the opposition she encountered throughout her career, Silver leaves behind a legacy of strikingly personal work, from her debut feature, the early-20th century black-and-white immigrant saga “Hester Street” (1975), through the alternative newspaper drama “Between the Lines” (1977), the relationship study “Chilly Scenes of Winter” (1979), the classic New York romantic comedy “Crossing Delancey” (1988), the farces “Loverboy” (1989) and “A Fish in the Bathtub” (1999, starring married comedy actors Jerry Stiller and Anne Meara); and a string of thoughtful TV movies focusing on social issues, including 1997’s “In the Presence of Mine Enemies,” about the Warsaw ghetto uprising; and 2003’s “Hunger Point,” about a teenager with an eating disorder.

Silver came up in the 1970s, when the old studio system lay in ruins and young, film-literate, independence-minded directors were remaking Hollywood. All were men. And they were usually fans of genre movies—suspense, science fiction, fantasy, adventure, westerns, gangster pictures, war movies—who knew how to talk to the almost exclusively male ranks of studio executives and persuade them that whatever arty reinvention of a familiar genre that they had in mind could become a hit.

Silver never made a genre movie, unless you count “a film set before the year of the director’s birth” as a genre. Some of her signature works were financed independently, piecemeal, then picked up for distribution after they were done. And yet her best-known features earned back anywhere from three to ten times their production costs, far beyond the three-times-the-budget threshold that’s typically agreed to constitute “a hit.” Adjusted for inflation, 1988’s “Crossing Delancey” made $125 million, the equivalent of $225 million in 2020 dollars, slightly less than “Get Out” and “Parasite.” “Hester Street” cost between $320-$350,000 and grossed $5 million. The melancholy and introspective relationship drama “Chilly Scenes of Winter,” based on the same-titled Anne Beattie novel, was retitled “Head Over Heels” and fitted with an inappropriate happy ending, both mandated by the distributor. It bombed. Silver recut and rereleased the film in 1982 under its original title with its original ending; it ended up earning $40 million, more than ten times its budget, and was eventually licensed to PBS, where it became so popular that stations ran it regularly throughout the 1980s to boost viewer donations during pledge drives.

Despite these successes and others, Silver was never recruited by a major studio to make an Oscar-baiting epic or a franchise picture; indeed, she had to continue to fight for every opportunity long after word had gotten out that she was fiscally responsible, had a populist touch, and was a superb director of actors. If Silver hadn’t been able to turn to her husband, commercial real estate developer Raphael D. Silver, for financing and distribution help when everyone turned down her pitch for “Hester Street” (they didn’t think a black-and-white 16mm period piece about Jewish people speaking subtitled Yiddish could be popular) it’s likely that the project never would have made it to the screen; Silver was vexed by the realization that, even though she was saved by her own connection to money, certain doors remained exceptionally difficult to open—and for other women filmmakers, as well as ethnic and racial and class outliers, they were locked and bolted. The medium was democratic in its storytelling impulses but not in its openness to new voices.

“Hester Street” and “Crossing Delancey” encountered marketplace resistance because the stories were too Jewish and too focused on women and relationships and feelings. “Between the Lines” and “Chilly Scenes of Winter” were considered too esoteric and literate. “Loverboy,” which in the abstract seems a natural continuation of the 1980s teen sex-flick trend, got a mixed reception from (mostly male) film critics, who were put off by the emphasis on slapstick over carnality, and the kooky specificity of the hero’s clientele, all of whom were granted a bit of humanity even if they were confined to one scene focused on sex.

Silver films were all quite different from each other, and from other notable colleagues’ movies. The common thread was her eye for the recognizable, often fleeting moment of humanistic observation. These moments were understated, almost sneaky in their ability to nestle within an establishing shot or a major plot point. They always felt like the products of an artist who understood what life was really about: an accumulation of mundane but necessary actions, made special by their context in a person’s life story, not because they were happening to important people.

You can see Silver’s rare gift on display in “Hester Street,” in the way that Jewish immigrants who have started to assimilate chide new immigrants for clinging to old customs, such as the compulsory wearing of hats and wigs; in the documentary-immediate shots of street peddlers and customers milling about a Lower East Side avenue while kids play on the sidewalk; and in the moment when a young man brings a young woman back to his flat: his “bed” is a spot on the floor of an apartment packed with other immigrants, and their murmured conversation is interrupted by the arrival by little kids who have to climb over the couple to get to their own sleeping place. You can see Silver’s gifts in a fleeting moment of “Chilly Scenes” where Charles Richardson (John Heard), a horny government functionary in Salt Lake City, makes an intellectualized joke to a secretary who asked him a simple question; the glint in his eye fades and his face falls, as if someone turned a dial that reduced his will to live. You can sense it in the anxious silence that fills the room in “Between the Lines” when the receptionist (Jill Eikenberry) at a once-proudly counterculture weekly newspaper quits in protest of the new owner’s attempts to dumb the place down, and the smugly self-righteous writers and editors look on, mute, too fond of their salaries to join her.

And you can see it in “Crossing Delancey” when a woman bursts into an a capella rendition of “Some Enchanted Evening” in a hot dog place—a commentary on the romantic conundrum of heroine Isabelle Grossman (Amy Irving)—and a man who’s been blasting a boombox turns it down for a moment, gifting her the spotlight. It’s a great moment on its own—reminiscent of “Moonstruck,” which came out a year earlier and was written by John Patrick Shanley, whom Silver cast in a bit part—but what makes it great are the reaction shots of the customers and staff. Some are delighted. Others are puzzled or mildly annoyed. And there’s one guy who just stands off to one side, watching and eating: the classic neutral New Yorker reaction to entertainment breaking out in a public space.

It’s worth noting here that other 1970s directors, all men, had success telling distinctively Jewish and/or urban- and suburban-focused stories, including Woody Allen and Paul Mazursky; but although they were granted access to bigger budgets and more aggressive marketing and advertising than Silver, and got respectful notices from critics and scholars at the time, none captured that sense of non-movie-ish, on-the-ground immediacy that Silver manifested when she was operating at her peak. And none had her gift for taking viewers inside an emotional epiphany through intuitive yet somehow correct filmmaking choices, like the long exchange of silent closeups between Amy Irving’s bookstore manager and Jeroen Krabbe’s bestselling author in the opening bookstore sequence of “Crossing Delancey,” a moment of pure attraction reminiscent of Wong Kar-Wai (who didn’t start making his own films until the year “Delancey” came out). Every moment in Silver’s best work wasn’t just planned out; it was felt, and you could tell that it meant the world to her.