Ja Rule Denies 50 Cent Bought 200 Seats To His Concert So Audience Would Be Empty, Offers $10K For Anyone Who Can Prove He Did

Ja Rule Denies 50 Cent Bought 200 Seats To His Concert So Audience Would Be Empty, Offers $10K For Anyone Who Can Prove He Did

Ja Rule is so convinced that 50 Cent didn’t buy tickets to his concert to make him perform in front of an empty audience, that he’s willing to put a few grand behind it.

Back in 2018, 50 Cent claimed that he bought out the first few rows of a Ja Rule concert so that the “Mesmerize” rapper would have to do his show for a small crowd. 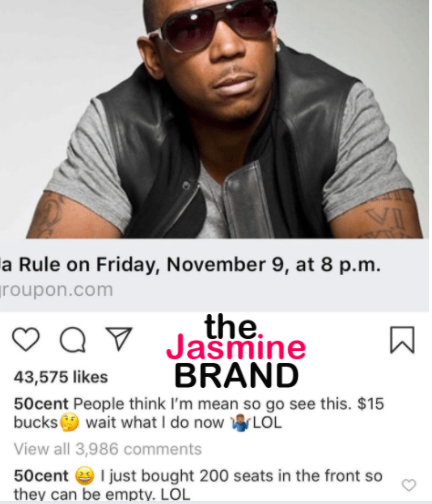 He also confirmed it on Bravo’s Watch What Happens Live.

Ja Rule isn’t only shutting down 50 Cent’s claims, he’s offering cash money to anyone who can prove 50 Cent lied.

“Such cap! King of cap! I got 10 stacks right now for anybody that can find footage of this foolery that this n—a is talking about. We live in a world where everything is on video. Come on man, stop with the foolery.”

He’s been pretty vocal about his feud with 50 Cent lately. Last month, he spoke on if he’d do a Verzuz battle with the Power star.

“Man listen, everybody don’t want the smoke. Everybody don’t want this smoke. I got heat. Let me tell you something, when I do my shows, I can rock. I’m telling you, it’s like an hour of straight hit records. No filler. All crab meat… All meat in that crab cake. It’s all meat.

“Listen, man, I love Verzuz, I love what it is, I love to see artists getting in there and doing the sh*t, but if I did one, if I did do a Verzuz, I would want my Verzuz to be fun.”

“That’s what Verzuz is supposed to be about — the celebration of music and the art, and the artistry. So, I would want my Verzuz to be fun, and filled with love in the room and sh*t, and that sort of thing. I’m too old to be in Verzuz beef, and to be in with my team of n*ggas, all my team of n*ggas, we’re like, ‘Come on, man’. I’m 44, dog. Just get a boxing ring and we get in there, and we do that. All this other funny nutty sh*t, we ain’t doing that, man.”

Do you think 50 Cent really bought the tickets? Comment and let us know.

The post Ja Rule Denies 50 Cent Bought 200 Seats To His Concert So Audience Would Be Empty, Offers $10K For Anyone Who Can Prove He Did appeared first on theJasmineBRAND.

Source of the article : New feed at Ja Rule Denies 50 Cent Bought 200 Seats To His Concert So Audience Would Be Empty, Offers K For Anyone Who Can Prove He Did