Good news for Jazmine Sullivan and her family! The soulful singer took to social media to share that her mother, Pam Sullivan,  has completed chemo therapy after battling breast cancer.

Sullivan says she was apprehensive to share this with her fans, but chose to since it was close to her heart. She first revealed the good news on Twitter stating that today (Jan.10) was her mother’s last day of chemo therapy.

“Today is my moms final day of chemo! This is a huge milestone! Of all the blessings that are pouring in rt now… that is the only thing that matters to me!! I’m in tears and in awe of God’s grace n mercy! Anyone going thru breast cancer please know I’m praying for u!” 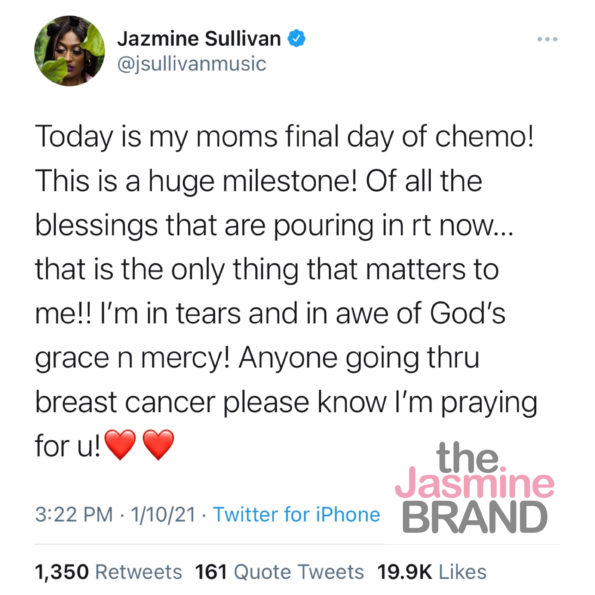 The singer then took to Instagram to repost the message and also shared a heartwarming caption to the post. She wrote,

“I didn’t know whether to share this or not… but this is my heart! For anyone who’s sent me messages asking abt how she’s doing.. we’re doing great! Still in the fight but not where we used to be. All cancers are a journey but I feel in my heart we’re on the otherside! Prayers for everybody in whatever stage you’re in. Ur not alone!”

Jazmine Sullivan first revealed in May that her mother had breast cancer and even shaved her head in support of her mother’s battle. In a touching post, Sullivan shared a photo of she and her mother as well as a video of her shaving her head in solidarity.

We’re glad that Jazmine Sullivan’s mother is getting better and on the road to recovery!

The post Jazmine Sullivan Shares That Her Mom Has Completed Chemo Therapy After Battling Breast Cancer appeared first on theJasmineBRAND.

Source of the article : New feed at Jazmine Sullivan Shares That Her Mom Has Completed Chemo Therapy After Battling Breast Cancer