NeYo’s Wife Crystal Smith Responds To A Social Media User Who Said The Couple Wouldn’t Last: ‘He For Everybody’

Singer/songwriter NeYo and his wife Crystal Smith are still in bliss after he proposed to her again. But it looks like not everyone is here for it as a social media user had a negative remark about the couple. 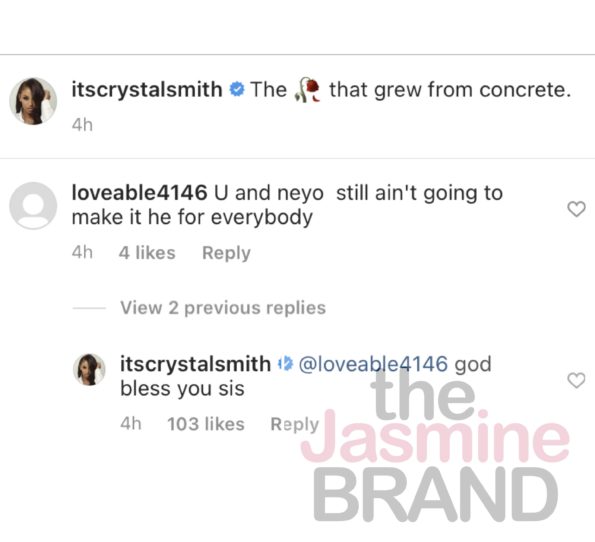 Crystal explained that she realizes the negative opinions have nothing to do with her and she chooses to rise above.

“Had to realize it’s not about me. They are unhappy with their lives”

As previously reported, NeYo proposed to Crystal Smith for the second time on New Year’s Eve!

theJasminebrand broke the news of their breakup in February 2020.

NeYo confirmed their split during an interview stating:

“It’s slowly but surely becoming public knowledge that myself and my wife have decided to go ahead and get a divorce. It’s not a sad thing, it’s more of a us realizing long story short, I’m never gonna talk bad about her.”

In November, the pair made an appearance on The Tamron Hall Show where they discussed their break up and reconciliation.

What are your thoughts on the negative comments Crystal Smith is receiving for reconciling with NeYo? Let us know in the comments below.

Source of the article : New feed at NeYo’s Wife Crystal Smith Responds To A Social Media User Who Said The Couple Wouldn’t Last: